A reduction in achievement standards, the COVID-19 school lockdowns and a lack of transparency have contributed to a decline in student achievement in Virginia’s public education system, according to a report from the Virginia Department of Education.

“Virginia’s public schools have long enjoyed a reputation for academic excellence,” Gov. Glenn Youngkin said in a statement. “But the data in this report demonstrates that Virginia’s student achievement gaps are disturbing and cannot be ignored. This report documents a clear and sobering lesson on the consequences for students when state leaders lower academic standards and dismantle accountability.”

According to the report, 42% of second-grade students scored below the benchmark in the Phonological Awareness Literacy Screener in 2021 and the commonwealth has fallen from third to ninth in students earning credit on advanced placement exams.

“Virginians deserve to know the truth about how our children are doing,” Secretary of Education Aimee Guidera said in a statement. “Under Governor Youngkin’s leadership, we aim to be the most transparent and accountable state in the nation, while empowering parents and teachers with the knowledge and choices to do what’s best for each learner.”

The report argued one of the primary causes of students’ declining performance was the state’s decision to lower education standards, rather than increase achievements. According to the report, the Board of Education lowered proficiency standards for all elementary, middle and high schools for the reading portion of the state-run SOL tests. This contributed to the “honesty gap,” which demonstrates the discrepancy between state standards and federal standards. The gap is wider among Black and Latino students.

“Decisions made at the state level created confusion in Virginia education and downplayed troubling trends,” Youngkin and Virginia Superintendent of Public Instruction Jillian Balow said in the report.

“It is noteworthy that the rhetorical emphasis on equity coincided with the widened gaps in student achievement,” they added. “And now, decisions at the state level must correct those errors and reverse these disturbing trends.”

According to the report, Virginia also lacks transparency about how students are performing.

“I want to stress that this report is not an indictment of our teachers, principals, and other school leaders,” Ballow said in a statement. “They have worked tirelessly over the last few years under extraordinary conditions and circumstances. But local decision-making inevitably reflects priorities and policy choices determined at the state level. I am committed to working with Governor Youngkin, the state Board of Education, and the General Assembly to reorder Virginia’s K-12 priorities, raise expectations for all of our students, and create an accreditation system that is transparent, honest, and that prioritizes grade-level proficiency.”

The Department of Education stated in the report it intends to increase expectations for students and schools and provide more transparency so each student can receive what he or she needs for success. 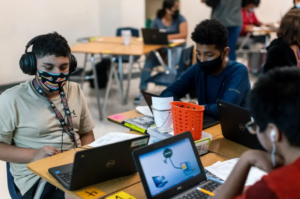