Supporters and opponents of a 145-mile hydropower transmission line through Maine have poured more than $52 million so far this year in their efforts to sway voters ahead of a November referendum.

The ballot question set for the Nov. 2 elections will ask Maine voters if they want to ban the New England Clean Energy Connect project and require a two-thirds vote in the state Legislature for any future hydropower transmission projects.

The biggest spender on the ballot question to date is Clean Energy Matters, a political action committee created by supporters of the $1 billion project, which has pumped nearly $12 million into the effort, according to campaign finance reports filed with the Maine Ethics Commission.

Hydro-Quebec Maine Partnership, which is owned by the provincial government in Quebec, has spent more than $8 million promoting the corridor this year, records show.

Meanwhile, a PAC created to oppose the corridor, Mainers for Local Power, has spent just more than $3.7 million, according to campaign finance filings.

The No to CMP Corridor PAC, which also opposes the project, has spent another $115,412, records show.

Combined, spending from supporters and opponents of the controversial hydropower corridor project has exceeded $60 million since 2019, according to campaign finance filings.

Data from the ethics commission shows that the bulk of the campaign spending by the PACs has been by commercial sources, not individuals.

Earlier this year, Gov. Janet Mills vetoed a bill that would have banned foreign governments and entities from contributing to ballot questions in the state.

The proposal, approved by the state Legislature in the previous session, was aimed at choking off a source of funding for opponents of the ballot question.

The New England Clean Energy Connect project calls for providing up to 1,200 megawatts of Canadian hydropower to the region. Much of the power will be diverted to Massachusetts to meet its renewable energy requirements.

The project, which got underway earlier this year, has received permits and other approvals from the state and federal government. A court ruling in August called into question the legality of a lease for a roughly one-mile section of state land where the project is being constructed.

Backers of the project say it will create jobs, help green the regional power grid and reduce greenhouse gas emissions that scientists say are contributing to climate change.

Opponents say the project would carve through scenic swathes of forest in the North Maine Woods and lead to a loss of jobs and recreational tourism.

Both sides have waged a costly and bitter public relations war for several years over the details of the project, and whether it will negatively impact the state and its ratepayers.

A referendum set for the November ballot will ask Maine voters if they want to ban “high-impact electric transmission lines in the Upper Kennebec Region” and “require the Legislature to vote on other such projects in Maine retroactive to 2014, with a two-thirds vote required if a project uses public lands?”

A similar referendum was knocked off the ballot last year by the Supreme Judicial Court. 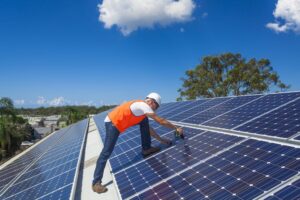