In an effort to pressure President Joe Biden’s administration to enact stronger oil and gas regulations, national environmental advocacy groups have released a new map that shows where people’s health is threatened by extraction.

The map is available online and people can type in their address to see how many production facilities are located within half a mile of their house.

During a press conference on Tuesday, Alan Septoff with Earthworks said in the San Juan Basin in northwest New Mexico, 80 percent of the residents are within that distance from a site.

According to a press release, the number of people living within half a mile of a production site in Eddy County, which is part of the Permian Basin, has increased by 40 percent since 2017.

While New Mexico is one of the top producing oil and gas states, it does not rank at the top in terms of health risk from oil and gas. Septoff explained this is based on the population of people whose health could be impacted from the facilities.

“Often the pollution goes unseen, but the climate and health impacts are clear. Oil and gas extraction is accelerating us deeper into a climate crisis, while exposing communities living closest to that extraction with known toxins and carcinogens,” Josh Eisenfeld, a corporate accountability campaign manager at Earthworks, said.

The map shows the location of oil and gas production facilities and maps houses and schools and daycares within a half-mile radius of those sites.

Septoff said the half mile radius is not a clear line and living outside of the radius does not mean that people can’t face health impacts from the facilities. He said the closer people live to a production site, the more likely it is to impact their health.

“This map gives the president 17 million more reasons, living breathing reasons to make sure that his EPA finalizes the strongest rules and stronger rules than they have already drafted,” Eisenfeld said. 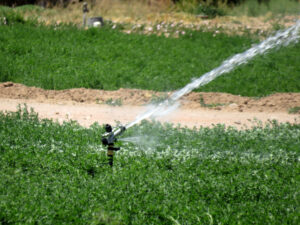