Students whose parents give their consent will get tested in school on a weekly basis, according to a school administrator.

The routine COVID testing, which can catch asymptomatic infections, will offer an extra layer of protection against the highly contagious delta variant as students return to classrooms on Sept. 7. Yet with school starting in less than a week, the Newark school district has not publicly shared details of its testing plan, including the cost.

Gov. Phil Murphy announced Wednesday that the state will provide at least $267 million to help districts pay for weekly testing of unvaccinated students and staff, funding that is in addition to federal money the Biden administration allocated earlier this year for school-based testing.

“We all want the safest return to school for children and staff,” said state Health Commissioner Judith Persichilli, “and this funding will help schools open safely by providing access to testing resources.”

Experts say regular testing is an effective, if costly, way to limit spread of the coronavirus.

The U.S. Centers for Disease Control and Prevention say that in-school testing can reduce the risk of infections when combined with other mitigation strategies, such as masking and social distancing. And while weekly testing can present logistical challenges, it allows schools to identify asymptomatic COVID carriers who could slip through temperature and symptom checkpoints.

Newark Public Schools offered weekly pooled testing this spring, when students and teachers swabbed their own nostrils and the samples were tested in batches. The results returned within 48 hours; if a group test was positive, then each person had to get retested individually.

The district will no longer use pooled testing, the teachers union said. Instead, a testing company will administer rapid tests weekly to each individual student, who should get the results within about 10 minutes, according to an elementary school principal who informed parents this week of the district’s testing plan.

Newark Teachers Union President John Abeigon told Chalkbeat that pooled testing had been difficult to carry out and sometimes produced unreliable results. He said the union is waiting for the district to share details of its plan for this school year.

“We would appreciate it if all students were tested, especially in the lower grades that do not have access to the vaccine,” he said. Only children 12 and up are currently eligible for the vaccine.

A district spokesperson did not respond to emails and text messages seeking information about testing.

Weekly student testing might not be necessary in areas with low COVID spread, Persichilli said Wednesday. As of Aug. 21, no region in the state fit that description. Vaccinated students can also skip routine testing, she added. Statewide, 44% of children ages 12 to 17 are fully vaccinated.

In New Jersey, districts can choose whether or not to offer routine testing in schools, and parents can decide whether to give their consent.

At a Newark school board meeting last week, Superintendent Roger León said the district was still finalizing its plan to provide regular testing to students and staff members. He added that families will get testing consent forms shortly.

“Obviously, we will be sending all of that information out so people can fill out all the proper documentation,” he said. 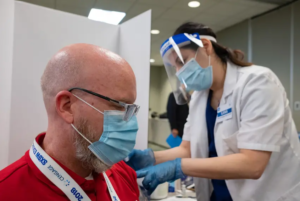